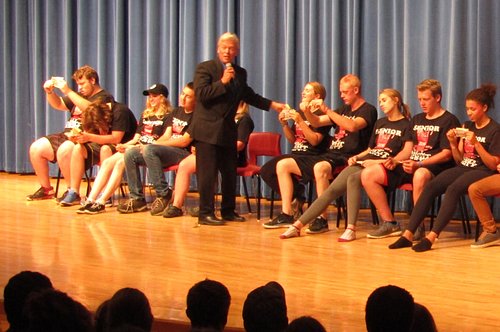 Comedy Hypnosis Show for Company Party in MN
"Last night's show has been the talk of the day! Everyone had a great time. Your magic tricks wowed them. The hypnosis part was a hoot. Thank you for your hard work and the excitement you put into the crowd. They will remember this party for a long while. Thank you!
- Joanne Benassi ,Project Administrator
NAC Mechanical & Electrical Services
Comedy Hypnotist for Company Parties in Minneapolis, MN
"We had him before and we'll have him again. Norm did a great job. It was a lot of fun. Tonight's show was great!"
- Steve Tryggiseth - Pesident, Puffalo Lions Club
Festival Comedy Entertainment
"Norm Knight had the audience in tears with laughter and his show was delightful. It was done in good taste as well. It was the best hypnotist show we have had here. I would highly recommend him!"
- Todd Hale – Manager, Steele County Fair, Owatonna, MN
K102 Morning Crew Amy James, Donna Valentine, Norm & “Muss.”
“Thank YOU so much again for making time for us and providing such fun. We had a great time and I'm sure our listeners enjoyed hearing Muss "under."

It's hilarious and crazy, yet clean comedy that delights audiences at colleges, parties and special events for corporate groups.
U of M in Duluth
This is your hypnotist headquarters for comedy hypnosis in Minneapolis.
Its fascinating comedy entertainment for holiday parties & events in St. Paul    & across the Twin Cities.
Your guests are the stars  of this wonder filled show.
Crazy Clean Comedy Stage Hypnotist Show
“Your great performance was well received by our students. The comments were very positive. Thank you again for the great time.”
- Kristy Modrow - Century College Director of Campus Activities
White Bear Lake, MN

Catch the Fun on this Video

"Everyone had a great time!  Lots of laughs & great fun."

This is your Hypnosis Headquarters for Comedy Hypnotism in Minneapolis & St. Paul.

The CEO of Hypno

"The hypnotic presentation was excellent."

"I would recommend him to anyone looking for appropriate  business entertainment. We had fun and recieved many compliments."

Your guests will have a laugh riot when this comedy entertainer weaves his wonder filled show.

He is available for holiday parties this year in Iowa, North Dakota and South Dakota.  His comedy hypnotism show has appeared throughout the Twin Cities from the Millenium Hotel to the Crowne Plaza.

"Norm's show was wonderful. We had a great time! Norm did a great job."

The CEO of Hypno - Norm Knight

"Everyone had a great time! Lots of laughs and great fun!"

The CEO of Hypno

Fascinating  Comedy Hypnotist in Minneapolis & St. Paul for Corporate Parties Company Banquet entertainment that delights audiences of all ages across the Twin Cities.  It is a wonder filled hypnotism stage show with lots of twists and clean comedy entertainment.